As a single female who travels to random countries to teach English, I often get asked is, "Is it safe?" My godfather has repeatedly told my mom, "Your daughter backpacked through Southeast Asia when she was in college, anything from then on will be considered 'safe.'" While that may be true, the real answer is that it depends greatly on who you are, where you are going and what kind of jobs you have. Here are a few super quick "safe" tips.


THE BIG FIVE: If you learn nothing else check out these quick five guidelines to staying safe while teaching abroad.

1. Be Legal! As stated in "But how do you work abroad" I am a goodie goodie. I don't believe in working illegally. First of all, it can put you in unsavory positions. Friends have been blackmailed, jailed and just threatened when they were working illegally. It doesn't happen all the time but it can happen, so just don't put yourself in that position.

2. Walk with purpose. I am not quite sure how to teach this as I have it naturally. It isn't always a good thing. Quite often in high school people approached me and asked, "Who do you want to kill?" or "Why are you so angry?" I am normally a very pleasant person, but when I walk I have a tendency to look angry. This is good for me. People are more likely to go after a skipping lollygagger, or a person who keeps looking at road signs than someone who is walking with determination.

3. Know your surroundings, and be nice to the regulars! I walk to work early, before 5am, sometimes. I take the longer route because it is better lit and has more guys selling newspapers. I am very nice to these men. I know their names. If I ever feel unsafe, or don't like the person walking behind me, I stop and talk to them for a while. In Spain there were three homeless men who lived in a church near my apartment. Sometimes my friends' host families gave lunches my friends didn't like. When that happened I would collect the lunches and give it to these guys. One night a guy followed me home and would not leave me alone. I made sure to pass by them and told them the guy wouldn't leave me alone. They stood up and ran screaming at him. He quickly left me alone. This was possible because I knew them, I knew my neighborhood and I planned on it. Another time someone was following me and I stopped into a nearby hotel my parents stayed at once. I explained someone was following me and I didn't want to keep walking home. They let me stay in their lobby until he left. 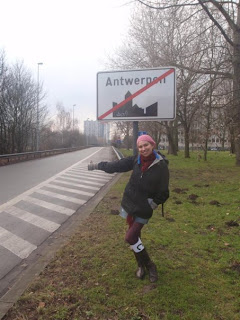 4. Don't be too polite all the time. I got to know the newspaper salesmen and homeless men in daylight. Not at 4am. Sometimes when I walk to work I have people pulling over to offer me a ride. 60% of the time it is a shady offer and I quickly refuse it. 30% of the time I think it is someone honestly concerned for me walking so early. 10% of the time it is someone asking a question. At 4am on a not so well lit street I am not polite. I don't walk over to the car to hear them better. I don't offer to show them. I curtly say I don't know, sorry, goodbye. There are times to be sweet and polite, but you need to know when those times are and when to just tell someone to go away. I happen to be a hitchhiker, but that doesn't mean that I would hop in every car that pulled over.

Randoms:
I am sure there are a million more tips I could give you, but most of them boil down to, "Use your common sense and stay aware."

What about you? What tips do you use to stay safe when travelling or living abroad?
Posted by Carissa Peck at 5:52 PM