Alternate Hangman (The Hangman you knew and loved, but more physical)

When I was young I remember spending HOURS playing hangman with my brother while my parents prepped for their own classes.

Many teachers that don't have much training start out with limited games and one of the go-tos is Hangman. It helps with word recognition, can be used to review vocabulary and is a great filler since it requires little to no prep. It isn't just for EFL and English classes; I can recall this being used in many of my classes throughout high school. We would use it in history (e.g. with president's names, battles, treaties), geography (e.g. countries, rivers, mountain ranges) etc. This version is a twist on the classic hangman that can be used in any class!

It was presented at a GEPIK conference I attended in 2008, while I was in Korea. I do not remember the name of the teacher, but she was a younger lady who was clearly overwhelmed at being told to help a group of 100+ new GEPIK teachers with activities for class, nonetheless she did really well.

One of her games was adapted hangman! I don't remember the specifics of her set up, but this is how I have used it over the years. I understand she used it mainly as a filler, but I suggest using it for a vocabulary review, OR to review pretty much anything. 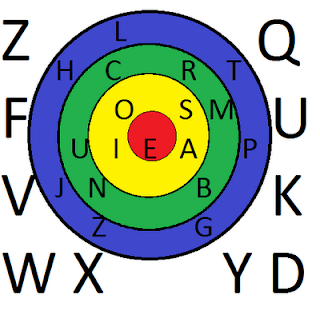 You can play this game two ways.

For both versions you need a target for the students to hit. You can make one out of cardboard/poster board and hang it on a wall or just draw one on the board. The point is to make the rarer letters on the outside (easier to hit) and the more popular letters on the inside (harder to hit). I made a sample here, but you can adapt it anyway you like. You may choose to have more letters in the middle or only 3 different area to hit (instead of my 5). You're the teacher so make it however you like!

VERSION TWO
Why add the beanbag throwing in the first place? With younger students (and even older students) the addition of the physical makes it more fun (and more like a real sport, not just a language game).

The reason the speaker added that in her class she had a few students who were physically competent. They played sports they were active and they had killer reflexes... but they struggled in English. When she divided the class into groups often students would be audibly disappointed when these students joined their group. By adding this physical component, they were no longer seen as liabilities and instead were viewed as assets. This helped their self-esteem and also classroom dynamics! I hate to perpetuate the stereotype of a “dumb” jock as it is not the norm (in my opinion) but if your class has students like this then try it may help.

So there you go: an easy twist on the classic Hangman!

If you have a chance to use it in your class please let us know! Or, if you have a different way of using hangman, I'd LOVE to hear it!
Posted by Carissa Peck at 8:51 AM