A family of pumpkins sitting on a gate.
The mommy said, "Oh, my it's late!"
The daddy said, "I don't care!"
The sister said, "There are witches in the air!"
The brother said, "Let's run away!"
And the baby said, "Boo! It's Halloween. Yay!"
Then Whoooooosh... went the wind,
And out went the light!
And the five little pumpkins rolled out of sight.

I know the original version is different (and great for ordinal numbers), but this was my Halloween adaptation when I taught preschoolers English(EFL for some ESL for others) in Spain.

Some people consider this a song, others a poem, and still others a fingerplay. I like to think of it as a song, but really it doesn't matter what you call it! If you aren’t familiar with it check out the YouTube video above the hand motions are great, and they LOVE the Boo!

My students ADORED it, and it was a fun review of family members. You could teach it several different ways, but this is what I did. 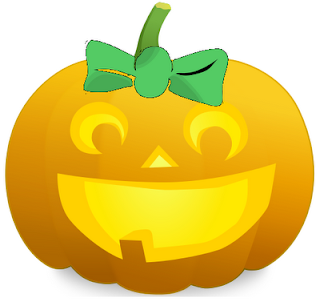 1.      We started class normally with the Hello song, and we reviewed our emotions (happy, hungry, sleepy, etc.). I introduced a new emotion, scared!
2.      We did quick flashcards of the family to review and I showed them the pumpkins. I asked which pumpkin was the baby? Which pumpkin was the mommy? Etc. Then we quickly cut out each pumpkin (by quickly I mean we cut out the pumpkins as squares, not as circles). Each student wrote their name on the back so the pumpkins didn’t get confused later (and to get them to practice their letters again).
3.      I drew a gate and a witch on the board and we learned the words.
4.      I said the five little pumpkins song and each time I said a family member I held up my pumpkin and had them hold up theirs.
5.      Then we repeated the song, line by line. I sang it, they repeated.
6.      I selected 5 students to be the pumpkins they would come up with one pumpkin family member and we would sing the song. They would hold their family pumpkin in their air when we said their part. (Repeat until all students who want to can come up to the class and be a pumpkin)
7.   As long as they enjoy the song and you have fun keep going! It is really great practice and repetition is key at this age.
8.      Review colors (What color is the sky? What color is a pumpkin? What color is grass?)
9.      For older (my four and five year olds) students they colored their pumpkins and then pasted them to the gate paper. My younger students (the three year olds) were divided, some cut, and some just colored a pre-made page (the last one in this packet)
10.  For fast finishers I also put a witch, some bats, some grass and the phrase, “Happy Halloween” that they can cut out and paste to the picture

Here are some sample worksheets should you choose to use them.

This is another easy example of how to use something that already exists and tweak it for your class. You could change this to review animals (5 different animals sitting on a gate, the bird said etc.), colors (the blue one said), adjectives (the small one said), jobs (the doctor said), and SO MUCH MORE! Get creative, and use this song for whatever works best for you.

Have you tweaked a song and had it work for you? Or do you have another activity you like for the 5 little pumpkins? Let us know in the comments

I had the honor to guest blog a Springtime version of this read more about that http://eslcarissa.blogspot.com/2013/03/carissa-guest-blogging-efl-preschool.html
Posted by Carissa Peck at 6:21 AM