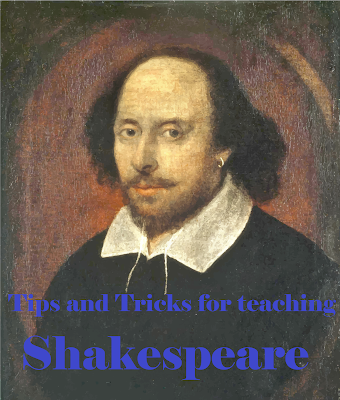 The volume will be on view in the Art Gallery at the San Diego Central Library! Most of the San Diego public programs for adults and families will be available then. However, to accommodate the fact that many schools will be finishing up in June, they are putting together some teacher professional development now!

There are more events going on, so if you are an English, Drama, History or really ANY teacher who delves in Shakespeare in the greater San Diego area I would strongly encourage you to look into this.

.
What would you do?
First off this is HANDS ON. So be prepared to participate. Bring paper and such to take notes if you like, but you'll leave with quite a few activities AND you'll have actually tried these activities.

Who is it for?
I am a high school English teacher. I teach students who are weaker in English. I am often labeled the ESL teacher, but this isn't quite true. While my students do receive more grammar and vocabulary than other English classes, we are still a literature class.

I walked away with quite a few resources and different ways to implement ideas in my classroom this week! If you teach drama or any of Shakespeare;s plays I am sure you'll be able to take away something useful.

SO MUCH! I'll give you my top three.
1. Learn about the first folio. For example, did you ever have a teacher tell you that punctuation in Shakespeare is SO important. Well this will delve into the history including the fact that we don't actually know how Shakespeare wanted to punctuate his plays (say what??). You'll briefly be introduced to the folio and quartos (the bootlegged versions).  You'll also learn what plays we would have lost if we didn't have the First Folio.

2. As teacher with many struggling readers, I know that one of the best ways to help them comprehend a text is to have them read it...again...and again...and again...at least three times. But who has time for that? This went over some easy ways to get students to read

We edited our own Shakespeare! After looking at the differences between different versions we were given the power of the red pen and in groups got together to cut down a scene. A really great activity that made us focus on what we wanted to keep and why. I know my group in particular had a discussion that included me saying "This is like the Han Shot First debacle. If we cut the line it changes motivation"

While no one in my group proved to be as much of a Star Wars geek as I am... they decided if I was that passionate the line should stay. This activity was great for ANY text, and I'll be adapting it for The Great Gatsby this week!

Finally, we were given TONS of resources and handouts etc. I haven' had a chance to go through all of the links, but I am in love with
The Free Teaching Modules from Folger

There are still have a few openings for an upcoming 2-Hour Teacher workshop this Saturday, March 5th, at the San Diego Public Library from 10:00am to 12:00pm.

If you can't make that, or if it fills too quickly, check out the other great events at the First Folio San Diego website.
Posted by Carissa Peck at 3:35 PM No comments: